Without Truth, Peace Will Never Be Possible

But I am also an increasingly-concerned, world-citizen.

On a daily basis, I watch the way public information is deliberately molded to serve power. I see the global conversation hijacked by corporate and private interests. I observe the way, little by little, language is losing all meaning and context as self-censored, media talking-heads, judiciously avoid actual information in favor reading canned, press release statements of "vetted" sources for fear of losing access to high-profile, seats of power.

The mainstream world is becoming more disoriented, more divorced from reality and less authentic with each passing day.

Critical Thinking is on the decline, while media-manufactured, scandal distraction and group think is on the rise.

REAL CHANGE will not be possible until citizens around the globe make a conscious decision to celebrate the brave individuals who speak truth to power, who stand steadfastly by their truth and who share their hard-earned wisdom so that others my see the actual path that we are traveling - instead of the illusion that propaganda and misinformation has fashioned over our instruments of perception to keep our hearts and minds from functioning properly. 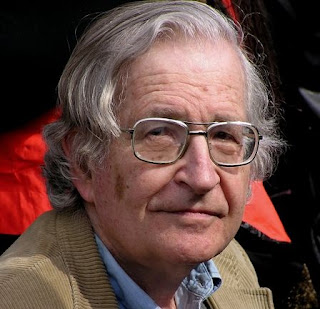 Professor Noam Chomsky is one of those brave individuals. He regularly shares reality-shifting perspectives, that shatter the official stories of corporate-funded, think tank justifications, designed to keep ordinary citizens complacent in times of great injustice.

Professor Chomsky speaks the kind of truths that make the powerful, the privileged and the corrupt take a good hard look in the national and global mirror...only to find themselves scrambling to answer his straight-forward challenge of their carefully-constructed, but demonstrably false, agendas.
So, with that in mind, I have started a petition to the International Court of Justice and the Norwegian Nobel Committee to consider nominating Prof. Noam Chomsky (international icon for justice among students and peace-minded individuals everywhere) for a Nobel Peace Prize.

Not just because I feel this nomination is well-deserved and long over-due, but because I believe the nomination will bring much-needed, international attention to the causes of Peace, Nuclear Disarmament and Climate Change – all of which Professor Chomsky (and anyone with a conscience) is passionate about.


For over half a century, Professor Chomsky has had to look the most horrific world events in the face then, calmly and intelligently, draw a map of the policies that allowed those events to come to pass so that others could understand the connectivity (or externalities, as he calls them) of neo-liberal, geopolitical strategies.

Professor Chomsky speaks truth to power. He spreads knowledge and understanding of how totalitarianism impacts the world. His tireless commitment to justice creates a dialog of truth which makes CHANGE POSSIBLE...which, in turn, makes PEACE POSSIBLE.


At least, that's the way it seems to me,