Did You Help Save the World Today? Well, You CAN!! Join the movement!
A New People Movement to End Corporate Hegemony!
When secret trade-agreements like the TPP start to pass we are seeing the future of oppression written out in contractual agreements with global implications.
What corporations don't want us to look at is that PROFIT COMES FROM SOMEWHERE.
Global Labor Treaty for Living Wages is a new global people movement. We created this petition asking President Obama to enact a world-wide labor treaty for living wages because economic inequality and social injustice is suffocating the natural gifts and resources of our human potential.
The corporate ethos of "Profits Over People" is quite literally killing the world...destroying nations, enslaving the vulnerable and poisoning our planet.
In order to bring balance back to our Earth and restore dignity to our civil unions we must take back the power of people-driven politics, so that we may rein-in runaway corporate abuses and growing shareholder hegemony.
Please SIGN and SHARE this petition to President Obama for a Global Labor Treaty for Living Wages.
If we CHANGE the way BUSINESS is done in the world - WE *CAN* CHANGE THE WORLD!!
Please *like* us on facebook: https://www.facebook.com/GlobalLaborTreatyforLivingWages

Please, "like", "tweet", "G+", "Pin us", "email us" and any other method of communication you can think of...including well-trained Carrier Pigeons :)


Thank you SUPER HEROES for helping to save the world!


Thank you for spreading the news!


Sharee Anne Gorman
annienomad-cyberpoet
http://annienomad.com
Posted by Unknown at 10:56 AM No comments:

What "12 Years a Slave" reveals about Capitalism.

"12 Years A Slave" won the Best Picture Oscar last night for 2014. Why is this significant? And what does it reveal about Capitalism?

This is a significant win because "12 Years a Slave" has a unique opportunity to provide an historical example of the consequences of oppression...which in reality is the basis of Capitalism.

Switch out the word "plantation owner" and replace it with the word "shareholder".

(Think Apple, whose iphones cost $199 to manufacture, but who sell it for $649.00 as reported by Computer World. Apple sees such a high margin on their "investments"... not because Apple products are so expensive to manufacture, but because they utilize slave-labor in order to put more money in their investors' and CEO's pockets.)

Switch out the word "plantation owner" and replace it with the word "corporation".

Switch out the word "cotton" and replace it with the words "conflict minerals" or "slave wages".

Slavery is not over in America...nor, is it over in any other country.

We only *think* slavery is over because it has mostly been outsourced. We no longer throw people on a boat, strip them of their rights and put them to work, under threat of the lash, on our inherited lands.

No, now corporations take the plantations to the slaves, in order to escape the horrible stigma of being branded "slave-makers". Out of sight, out of mind.

As long as you have enough distraction in the media, corporations and shareholders
don't have to be called what they are - modern-day, plantation owners.

Not that we still don't have domestic slaves.

Switch out the word "migrant worker" and replace it with the word "slave".

We don't see black people carrying around bales of cotton, so we don't equate it with slavery. As if cotton were the only product of slavery.

The government pretends they don't want "illegal aliens" here. They look the other way while "illegal aliens" slip under a very conveniently porous fence...so that, on the surface, it looks voluntary.

But, it was our strategic trade-policies (NAFTA) that impoverished the economies of these workers, forcing them to migrate north so that business owners could have the benefits of nearly, slave labor.

Once immigrant workers are in the country illegally, it is simply a matter of imposing on them the status of an "illegal", so that our fearless leaders can strip them of their civil rights...just like they did with the slaves of the old south. 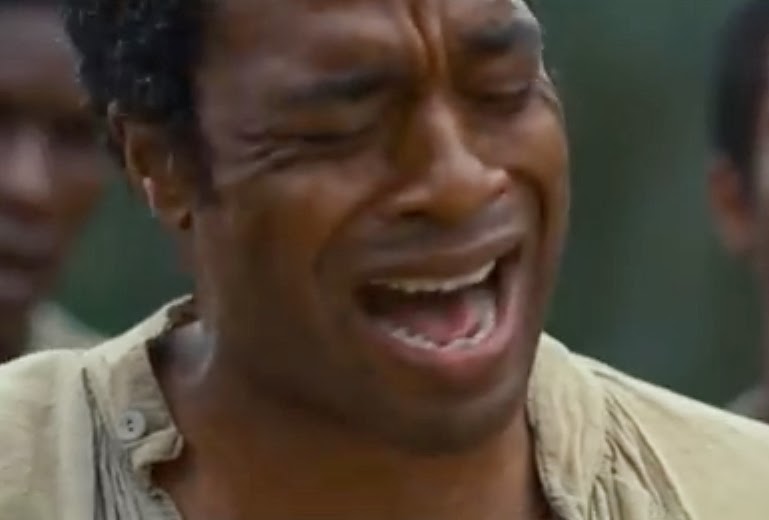 Click to watch "12 Years A Slave" trailer
Perhaps someday (and maybe, because of this movie) someday soon, a new generation will be able to throw off the blinders of indoctrination and see where profit and luxury actually come from.
Perhaps, those who never thought about it before, will finally come to understand that Profit Comes from Somewhere...it comes from crushing people.
Please sign and share this Global Labor Treaty for Living Wages petition. Let's end economic and manufacturing slavery. Let's change the way business is done in the world. Let's get this conversation started!
http://www.change.org/petitions/sign-now-to-enact-a-global-labor-treaty-for-living-wages
At least, that's the way it seems to me,
Sharee Anne Gorman
(annienomad-cyberpoet)
http://annienomad.com